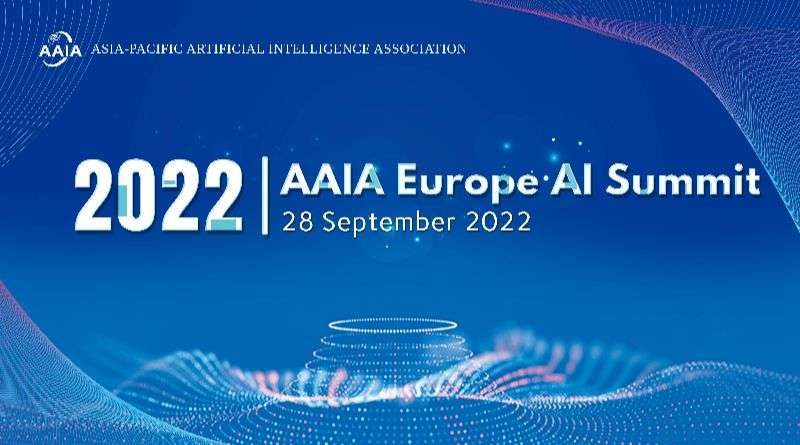 On 28 September 2022, AAIA (Asia-Pacific Artificial Intelligence Association) Europe AI Summit was a success. More than 200 experts and scientists joined this summit. Many AAIA fellows gave excellent keynotes and shared their leading researches. This summit was a success.

First AAIA President Schahram Dustdar (Member of the Academia Europaea; IEEE Fellow; Professor of Computer Science at the Vienna University of Technology) gave an opening address, introducing the general status of AAIA and welcomed  There are currently 883 Fellows, 249 of fellows are from Europe, 341 from the Americas, 239 of whom are from the United States, and 287 from Asia, 179 of whom are from China. The rest of the Fellows are from other regions. 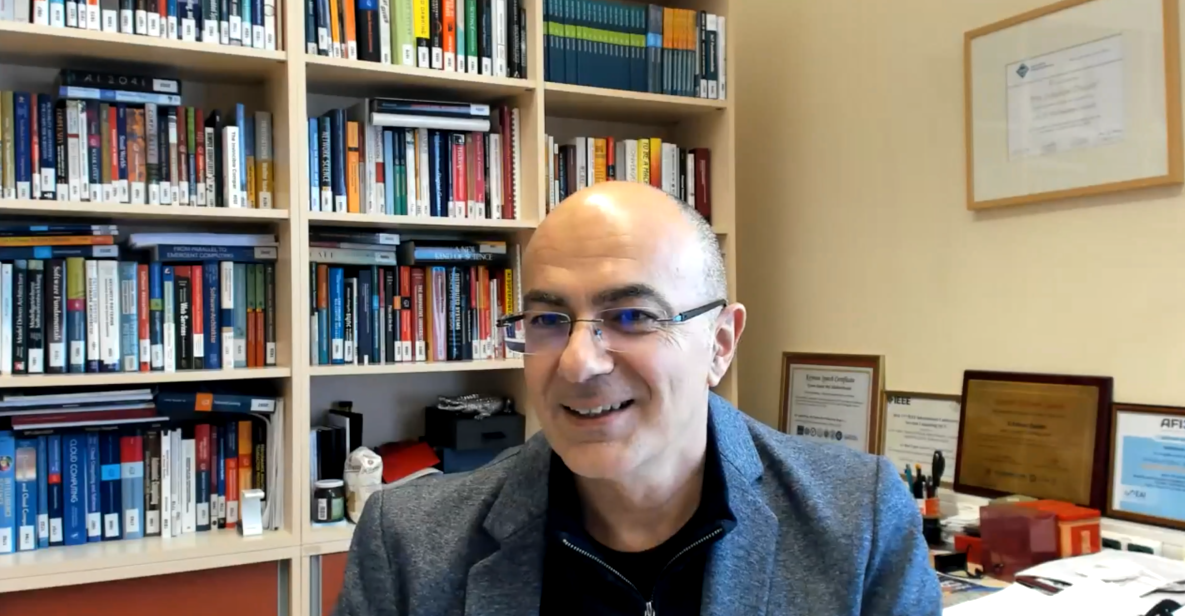 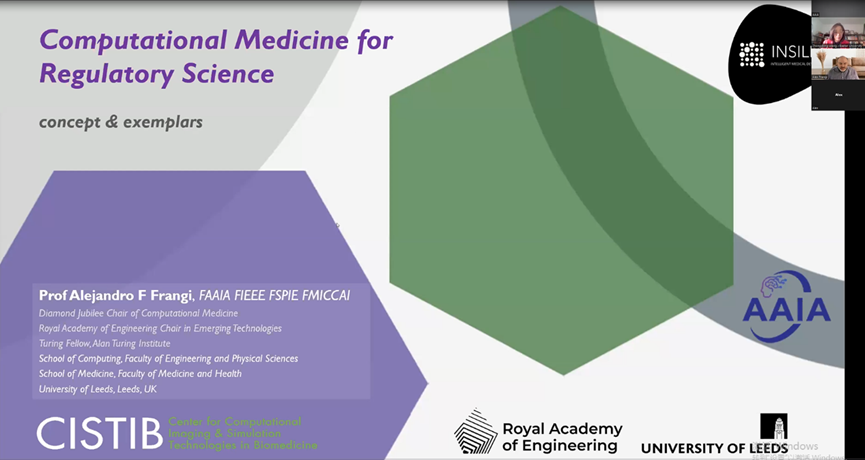 Professor Alejandro F Frangi described medical image analysis has grown into a matured field challenged by the progress made across all medical imaging technologies and more recent breakthroughs in biological imaging. The cross-fertilisation between medical image analysis, medical imaging physics and technology, and domain knowledge from medicine and biology has spurred a truly interdisciplinary effort that stretched outside the original boundaries of the disciplines that gave birth to this field and created stimulating and enriching synergies.  Precision Imaging is not a new discipline but rather a distinct emphasis in medical imaging borne at the crossroads between and unifying the efforts behind mechanistic and phenomenological model-based imaging. Precision Imaging is characterised by being descriptive, predictive, and integrative. It captures three main directions in the effort to deal with the information deluge in imaging sciences and thus achieve wisdom from data, information, and knowledge. Precision imaging can lead to carefully and mechanistically engineered imaging biomarkers and the use of medical imaging-based computational modelling and simulation for improved regulatory science and innovation of medical products. This talk summarised and formalised our vision of Precision Imaging for Precision Medicine and highlights some connections with past research and our current focus on large-scale computational phenomics and in clinical trials.

Professor Björn W. Schuller showed a rich state and trait attribution to general audio, going from a emotional high gender in speech to a doing the same for general audio sources. The version is to do this in a holistic processing manner, not looking at isolating the speech and looking into the speech or isolating musical instrument. We really take the audio as a whole. These resources means also do it from beginning to the end. The version is that we have a past from beginning to end through pre-processing representation and decision making commonly optimized. We need to be very efficient learning from few examples like Zero-Shot, augmentation, self-supervision, and transform. 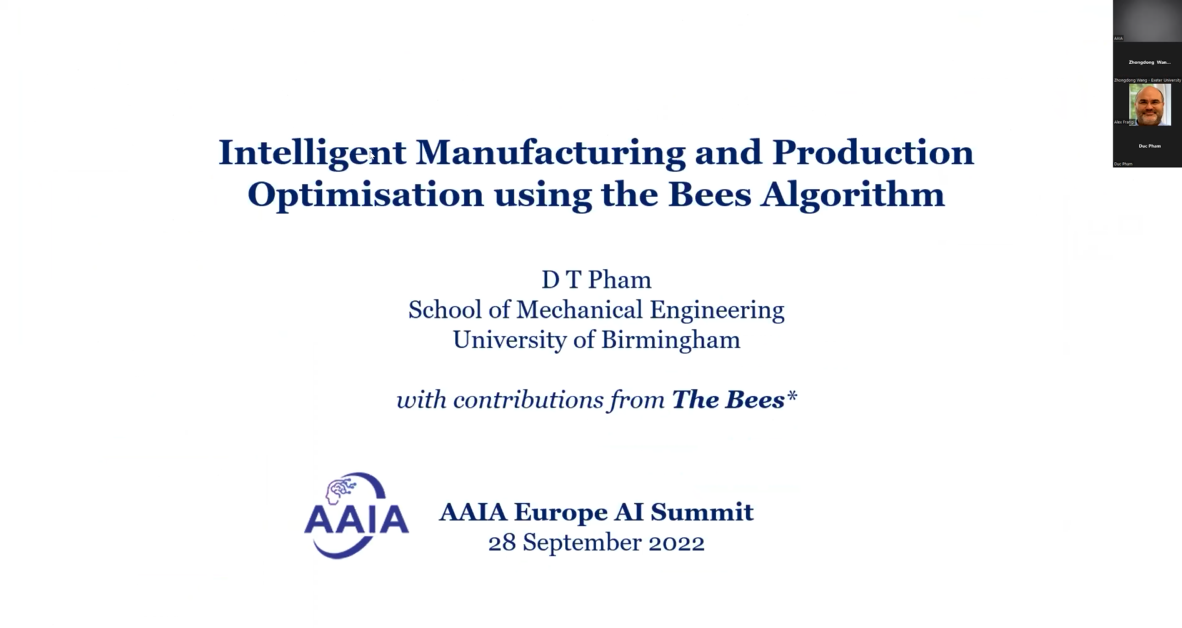 Professor Emanuele Trucco (Fellow of the Royal Society of Arts, UK; IAPR Fellow; Fellow of the British Machine Vision Association; NRP Chair of Computational Vision in Computing, School of Science and Engineering, at the University of Dundee, Honorary Clinical Researcher of NHS Tayside and an Adjunct Professor at the Chinese Academy of Sciences) have a talk on ‘Automatic retinal image analysis and dementia in VAMPIRE’. 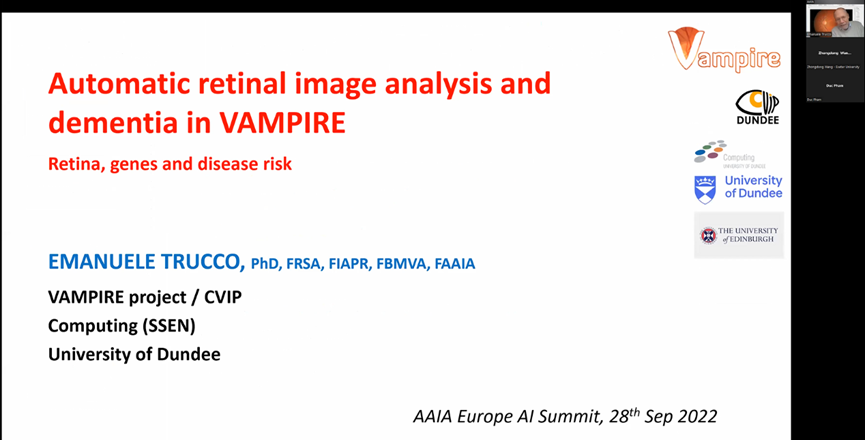 VAMPIRE is highly interdisciplinary, combining medical image analysis, machine learning and data analysis, medical research, and large-scale data studies. Professor Emanuele Trucco presented the VAMPIRE system, developed by the team in an international collaborative project, to present retinal vascular-specific Professor Emanuele Trucco presented the VAMPIRE system, an international collaborative project developed by the team, which introduced the association of specific morphometric parameters of the retinal vasculature, such as retinal vessel diameter, curvature and fractal dimension, with cardiovascular risk factors and cardiovascular events across the disciplines of medical image analysis, deep learning and data analysis. This talk by Professor Emanuele Trucco outlined the aims, content and current results of VAMPIRE, while describing the measures and challenges in studying automated retinal image analysis and dementia. 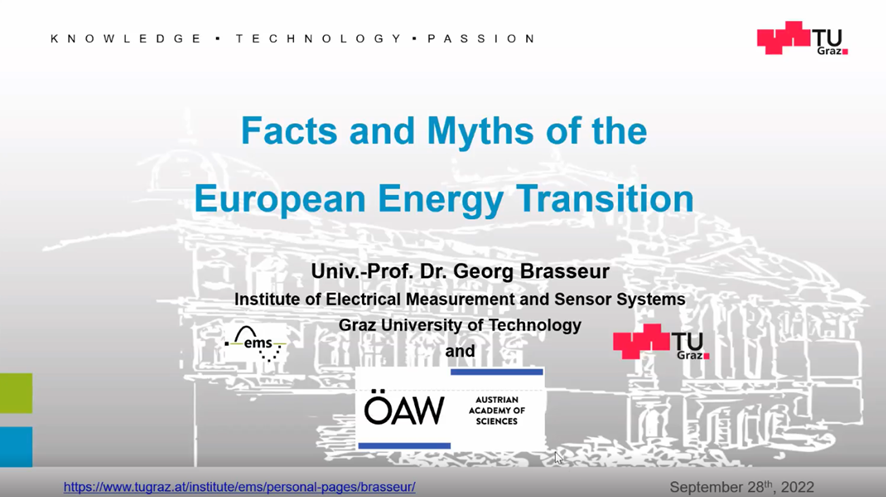 Professor Georg Brasseur pointed that global warming is progressing with noticeable effects. Currently, about 36Gt of CO2 are released annually. Our target is to limit global warming to max. 1.5℃ or 2℃ , which calls for short-term and significant greenhouse gas reductions in all sections. Professor Georg Brasseur analyzed the global energy demand and the European primary energy demand, the energy density of wind and solar energy compared to fossil fuels, and how to make optimal use of the electricity genetated in Europe.

Professor Georg Brasseur proposed that several measures are necessary to achieve the European energy transition: save energy, expand green power and generate green storable energy carriers, defossilize the European electricity network and only grant state subsidies to electricity consumers who can clearly demonstrate that they meet the efficiency criterion and thus contribute to defossilization, create political framework conditions for planning & legal certainty for investments, policymakers act in a technology-open manner, and so on.

Professor Gianluigi Greco (EurAI Fellow; President of the Italian Association for Artificial Intelligence; Professor of Computer Science and Head of the Department of Mathematics and Computer Science, the University of Calabria) gave a talk on ‘Reasoning about Business Processes with LTL’. 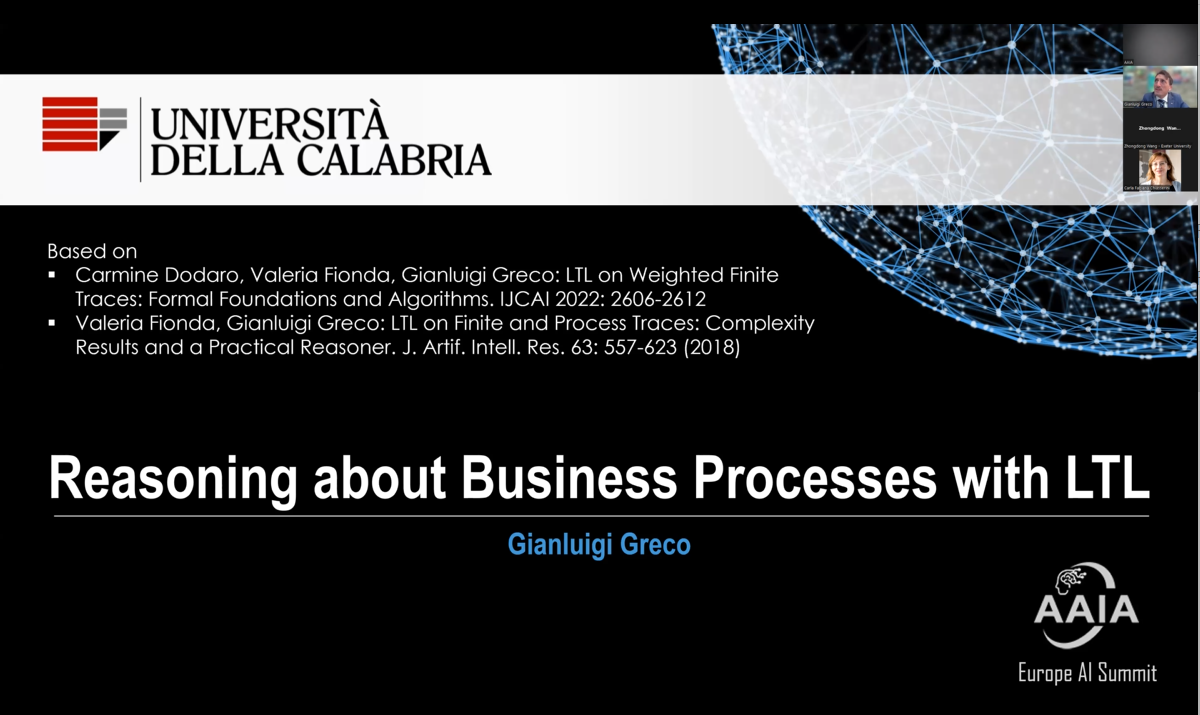 Professor Gianluigi Greco noted that the goal of workflow automation has to be achieved by the collaboration of a number of actors. To support workflow automation, we need a to specify the order in which the various activities have to be executed, like procedural approach and declarative approach. Professor Gianluigi Greco gave the discussion of formal properties for LTLf and the results, and further pointed out that the LTL2SAT system architecture can be used as of its effectiveness. 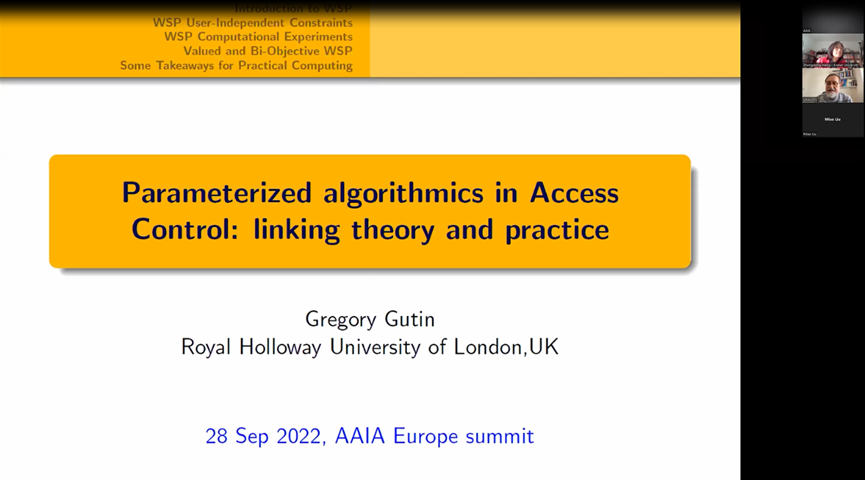 Professor Gregory Z. Gutin considered some problems in information security access control. Several such problems are fixed-parameter tractable (FPT) i.e. can be solved by an algorithm of runtime f(k)N^c, where f is a computable function, k is the parameter,and c is a constant. It is therefore shown that if such a problem is proved to be FPT, then it can be solved in FPT-like runtime using SAT or CSP general purpose solvers. 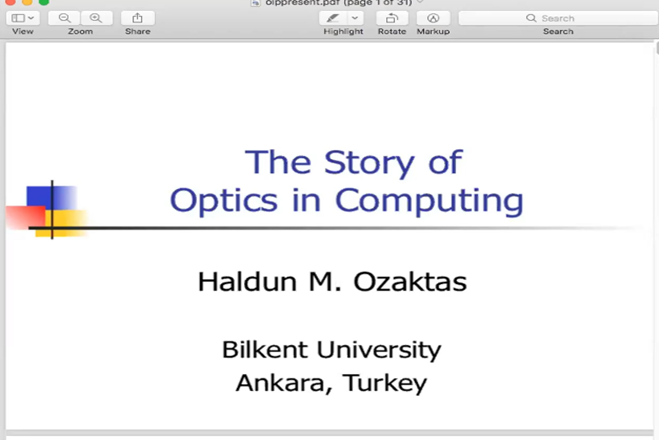 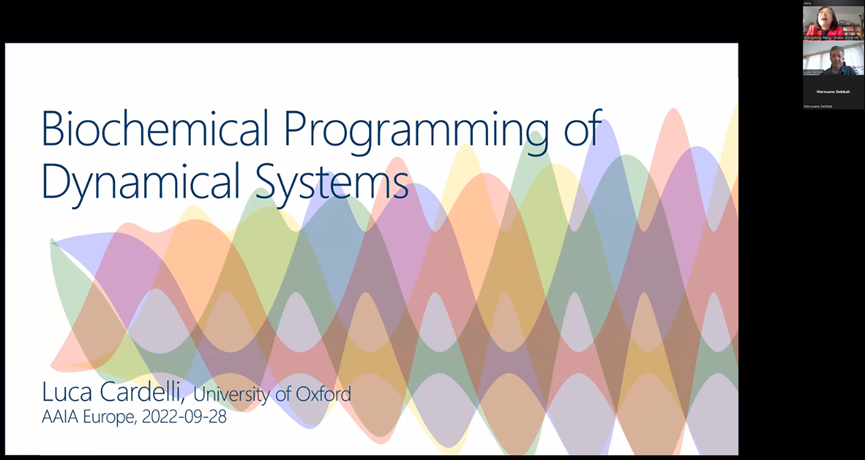 Professor Luca Cardelli discussed experimentally realizable methods for systematically implementing almost-all-encompassing classes of dynamical systems, showing that there are very few limitations, in theory and in practice, to the complexity of synthetic (and natural) biochemical behaviors.

Professor Maria Pia Fanti (IEEE Fellow; Professor of System and Control Engineering at the Department of Electrical and Information Engineering of the Polytechnic of Bari; Chair of the Laboratory of Automation and Control) presented on ‘Consensus Protocols for Autonomous Vehicles Control’.

Professor Maria Pia Fanti pointed out that Autonomous Vehicles are equipped with an increasing number of sensors, telecommunication systems and computation agents. In distributed control problem of multi-agent networks each agent is a dynamical system and the problem of reaching an agreement on all or some components of the agents’ status is known as consensus problem.

The talk presented two strategies of consensus protocols to be applied in leaderless network of agents. The first consensus protocol is applied by vehicles that that have to reach a common velocity while forming a uniformly spaced string. The consensus protocol parameters are optimized for networks characterized by a communication topology described by a class of directed graph having a directed spanning tree, in order to maximize the convergence rate and avoid oscillations. The second consensus protocol solves an intersection management problem by using only V2V communication, i.e., without employing an external intersection management agent. The AVs apply an iterative algorithm, which avoids collisions crossing the intersection and minimizes the delay or the anticipation with respect to a forecast exit time from the intersection. The talk enlightened that the presented control methods will be applied in Horizon Europe projects for managing connected, cooperative automated vehicles.

Professor Mérouane Debbah said mobile cellular networks are becoming increasingly complex to manage while classical deployment/optimization techniques are cost-ineffective and thus seen as stopgaps. This is all the more difficult considering the extreme constraints of 5G networks in terms of data rate (more than 10 Gb/s), massive connectivity (more than 1000000 devices per km2), latency (under 1ms) and energy efficiency (a reduction by a factor of 100 with respect to 4G network). Unfortunately, the development of adequate solutions is severely limited by the scarcity of the actual resources (energy, bandwidth and space). Recently, the community has turned to a new resource known as artificial intelligence at all layers of the network to exploit the increasing computing power afforded by the improvement in Moore’s law in combination with the availability of huge data in 5G networks. This is an important paradigm shift which considers the increasing dataflood/huge number of nodes as an opportunity rather than a curse. In this talk, Professor Mérouane Debbah discussed through various examples how the recent advances in artificial intelligence can provide an efficient framework for the design of wireless Networks. 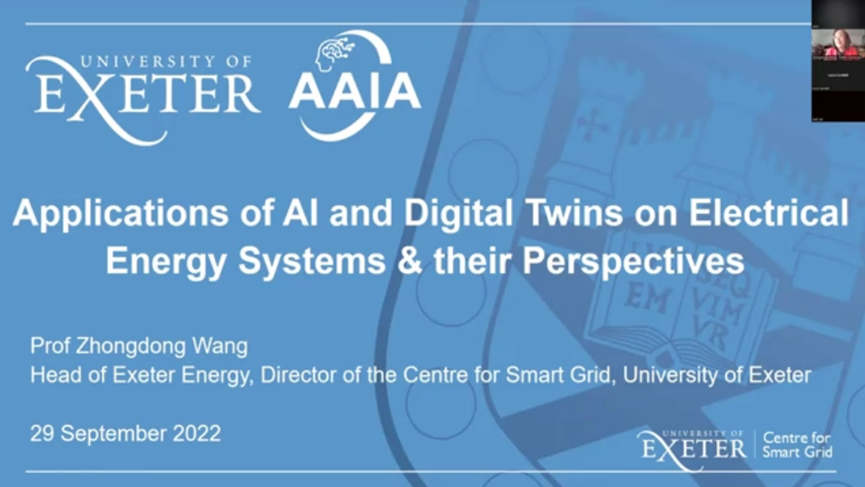 Professor Zhongdong Wang pointed out that 2050 Net-Zero target needs the society to exploit “real-time” solar energy available via the wind, photo-voltaic, waves, bio-mass and hydro, to incorporate these green, but often intermittent resources, electricity networks have to become smarter, and real-time information needs to be communicated between producers and consumers of electricity, local and national energy stores, and the operators of the T&D grids. AI research has been widely carried out to optimise performance of processes of energy prediction, energy market price forecasting and supply & demand management etc. Recently digital twins are under development to prepare for the digitalisation future of power network infrastructure. It is important to emphasize if AI and any new digital technologies can truly contribute to the energy sector and our Net-Zero future, they need to provide high or at least equal reliability as human energy system operators and can function properly at any emergency scenarios.

This is the video of this summit:https://www.youtube.com/watch?v=7KyfNvMT05Y

The 2021 IEEE International Conference on Imaging Systems and Techniques